The Dante Society London offers exclusive trips in Italy to discover Dante's places. The dream locations are surrounded by many small wineries and producers of local excellence.
You will visit the cities where Dante stayed and discover the mysteries related to his exile. In the evening an intimate concert interspersed with verses from Dante's Divine Comedy will be performed for you.

Why did I decide to promote this trip?
​
“After two decades spent outside Italy, I have gained experience in other European countries such as Germany, France and England always cultivating the great passions of my life: Music, Dante's Poetry and culinary excellence, in one word, Italian Culture. Today, thanks to the collaboration of the agency Raggio Verde incoming Italy, the three passions come finally together in a single project. With this trip I can share the beauties of the "Bel Paese" with you, my music and the itineraries of the Great Poet during his exile outside his beloved and hated hometown. I will also be there to offer you an intimate recital of music and poetry and together we will appreciate the beauty that will surround us."
Santy Masciarò, Dante Society London

On Sunday 3 October the participants will meet the illustrious Dante expert John Took at the Dante Society London headquarters to learn about the true deep origin of the thought and works of the Sommo Poet.
​
​Places available are limited.
​Your Italian experience includes:
Contact us to receive the details and the cost of the trip. 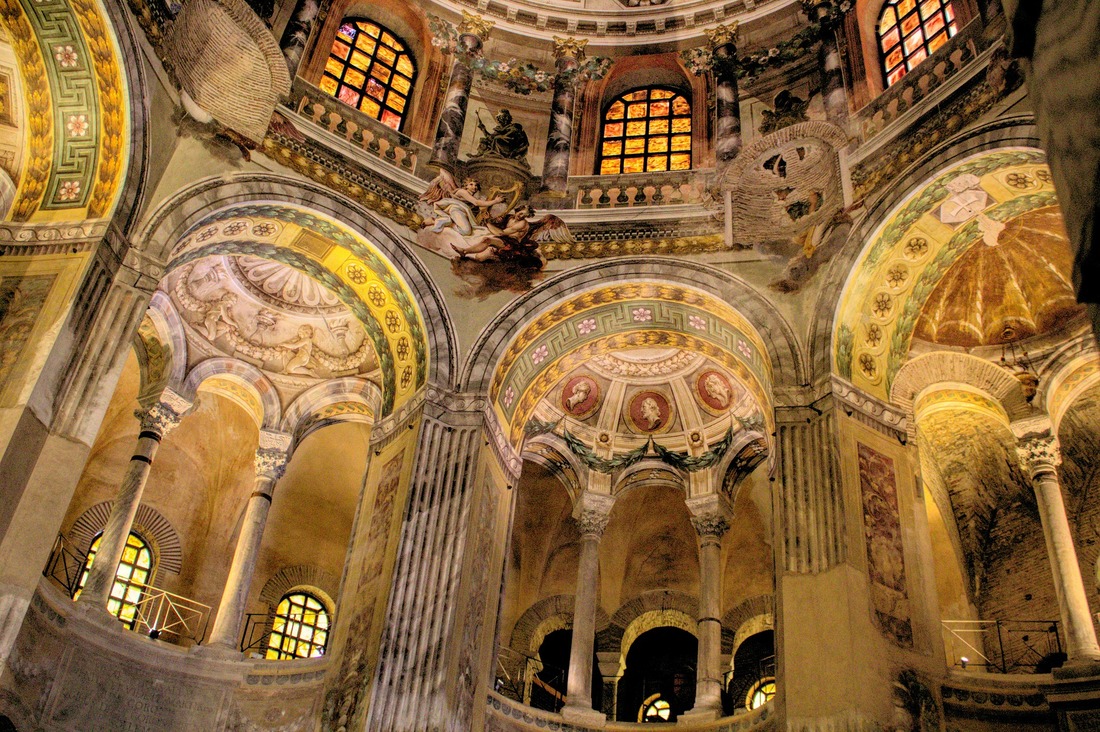 Ravenna World Cultural Heritage
"The early Christian religious monuments in Ravenna are of outstanding significance by virtue of the supreme artistry of the mosaic art that they contain, and also because of the crucial evidence that they provide of artistic and religious relationships and contacts at an important period of European cultural history".
It is for this reason that in December 1996 Unesco ratified the inscription of the eight Early Christian monuments of Ravenna on the World Heritage List of Unesco. From that moment, the Basilica of San Vitale, the Mausoleum of Galla Placidia, the Arian Baptistery and the Baptistery of Neon, the Basilica of Sant'Apollinare Nuovo, the Basilica of Sant'Apollinare in Classe, the Oratory of Sant'Andrea (or Archiepiscopal Chapel) and the Mausoleum of Theoderic have been not only heritage of our city but also of the entire world. 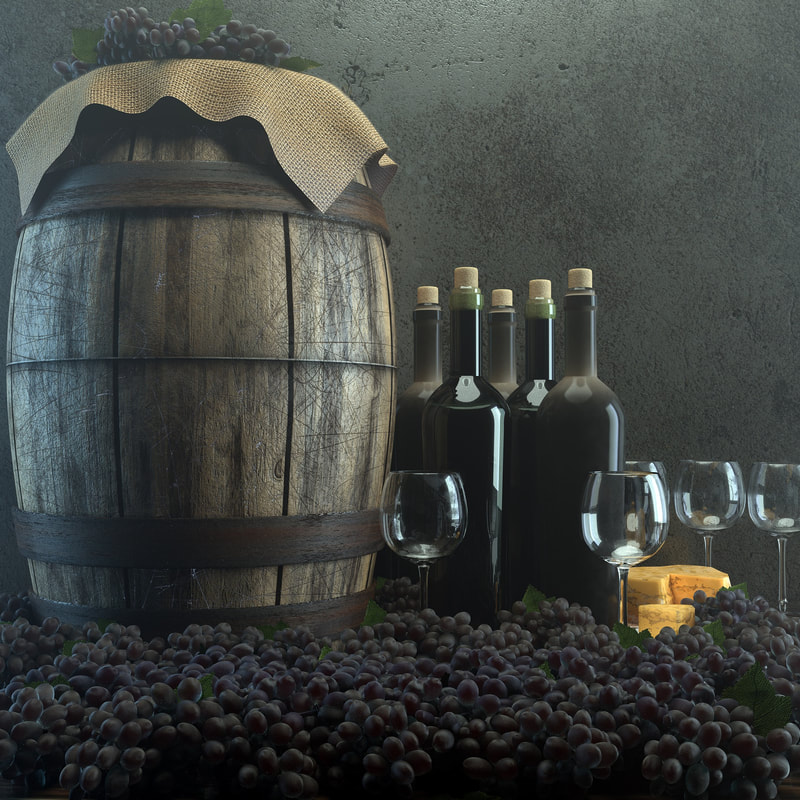 Cantina Celli in Bertinoro
The tradition of wine in Romagna, north of Italy, tells a popular and peasant tale, a story of extraordinary yet simple people who kept a patrimony of wine-growing culture alive on which we can now draw generously to produce today’s quality. 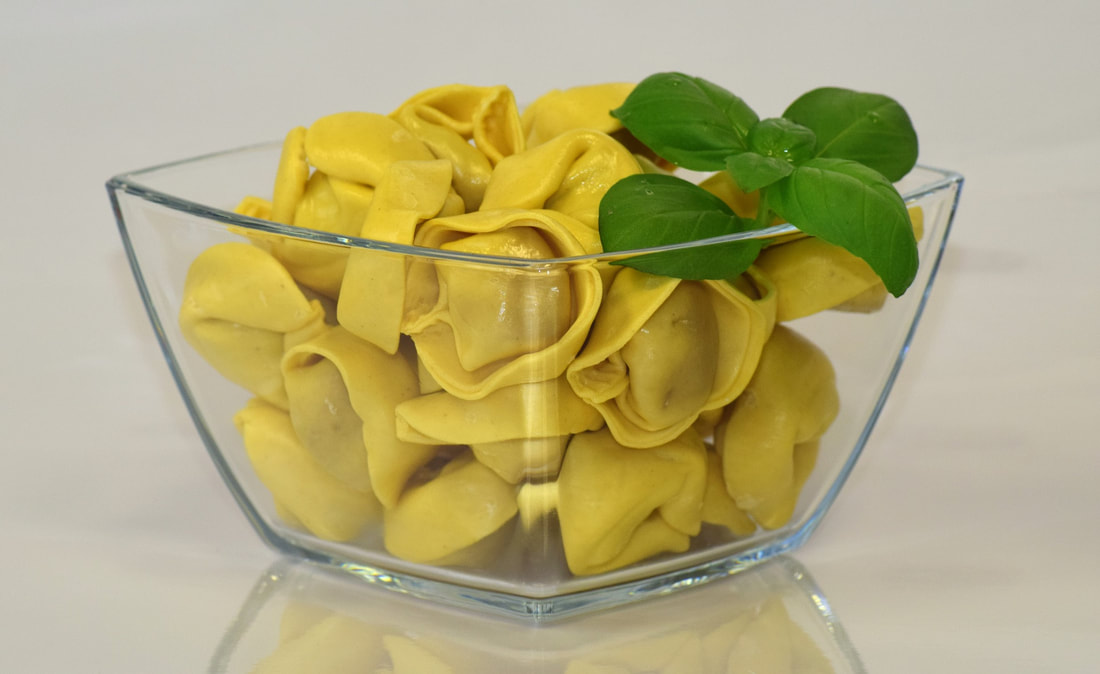 Casa Artusi is the very first centre of gastronomic culture to be established, devoted entirely to Italian home cookery.
Casa Artusi was founded in the name of cultured gastronomist Pellegrino Artusi (1820-1911), who can be found in many homes, both in Italy and abroad, through his manual La Scienza in Cucina e l’Arte di Mangiar Bene (Science in the Kitchen and the Art of Eating Well). 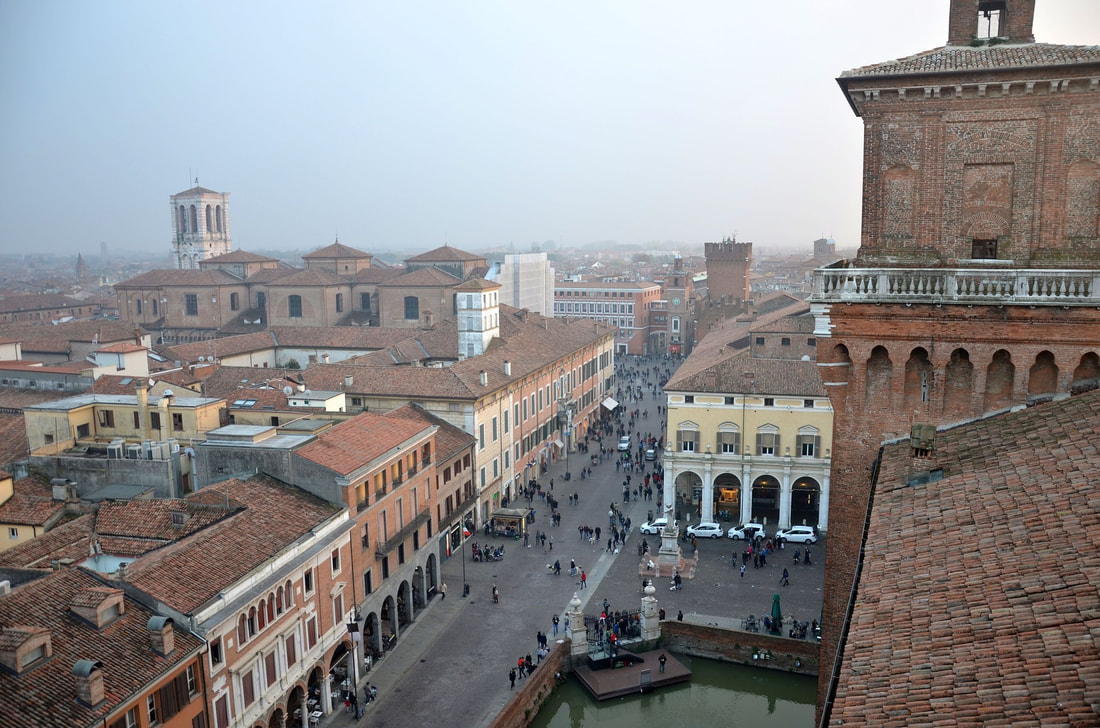 Ferrara
Ferrara is a city in Italy’s Emilia-Romagna region. It’s known for the buildings erected by its Renaissance rulers, the Este family. These include the moated Este Castle, with its lavish private chambers. The family also built the Diamanti Palace, which is clad in diamond-shaped marble blocks and home to the National Picture Gallery. The Romanesque Ferrara Cathedral has a 3-tiered facade and a marble bell tower. 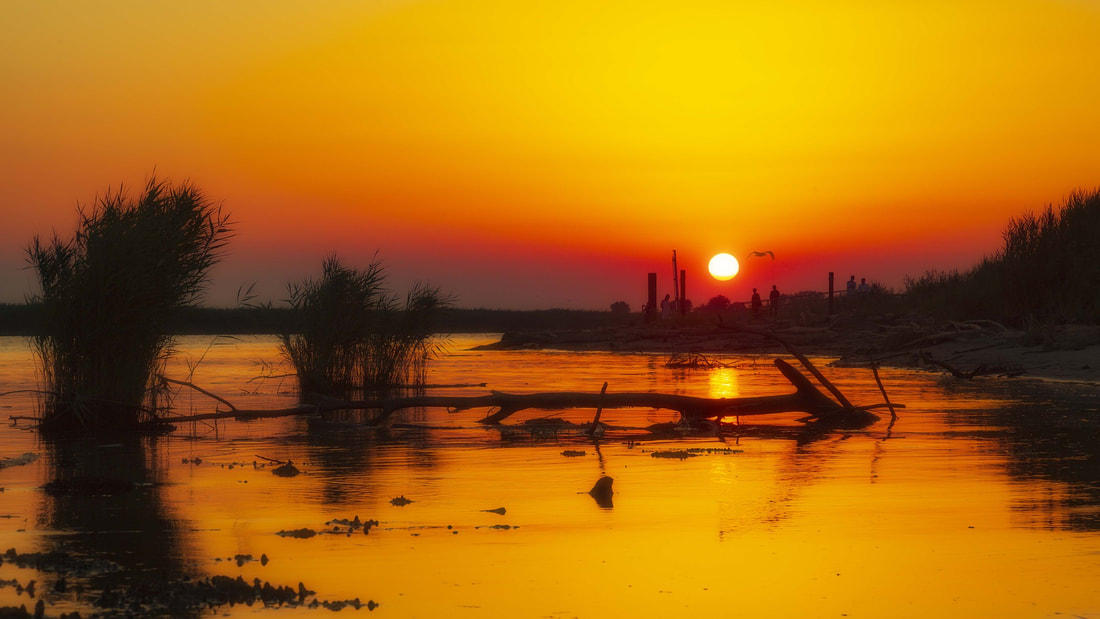 Po Delta Park
Forests and green pinewoods, an abundant flora and fauna population, valleys of freshwater and brackish water and rivers that flow into the Adriatic: these are some of the pieces that make up the extraordinary mosaic of the Po Delta, a magnificent example of biodiversity, in which water has been the absolute protagonist for centuries.
Here, where the land and the sky blend together, there are captivating natural treasures like few others that exist in the world, so unique as to have been designated a UNESCO World Heritage site in 1999. 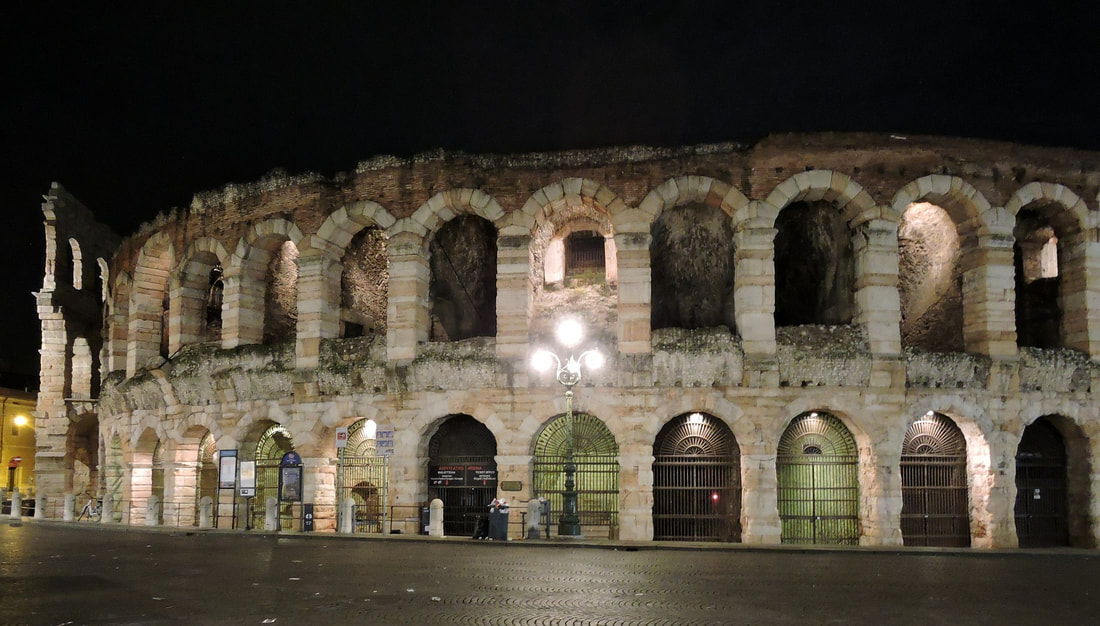 Verona
​​So splendid was mediaeval Verona that its reputation alone inspired Shakespeare to set two plays here (Romeo and Juliet and The Two Gentlemen of Verona). Though its connection to the actual Capulets is tenuous at best, the so-called Juliet's House draws half a million tourists per year, many of them keen on reenacting the balcony scene. Our Dante first visited Verona in 1303, staying until the following year as a guest of Bartolomeo della Scala. He returned in 1312, staying until 1318, this time hosted by Bartolomeo's brother Cangrande della Scala to whom he dedicated the entirety of his Paradiso epic poem 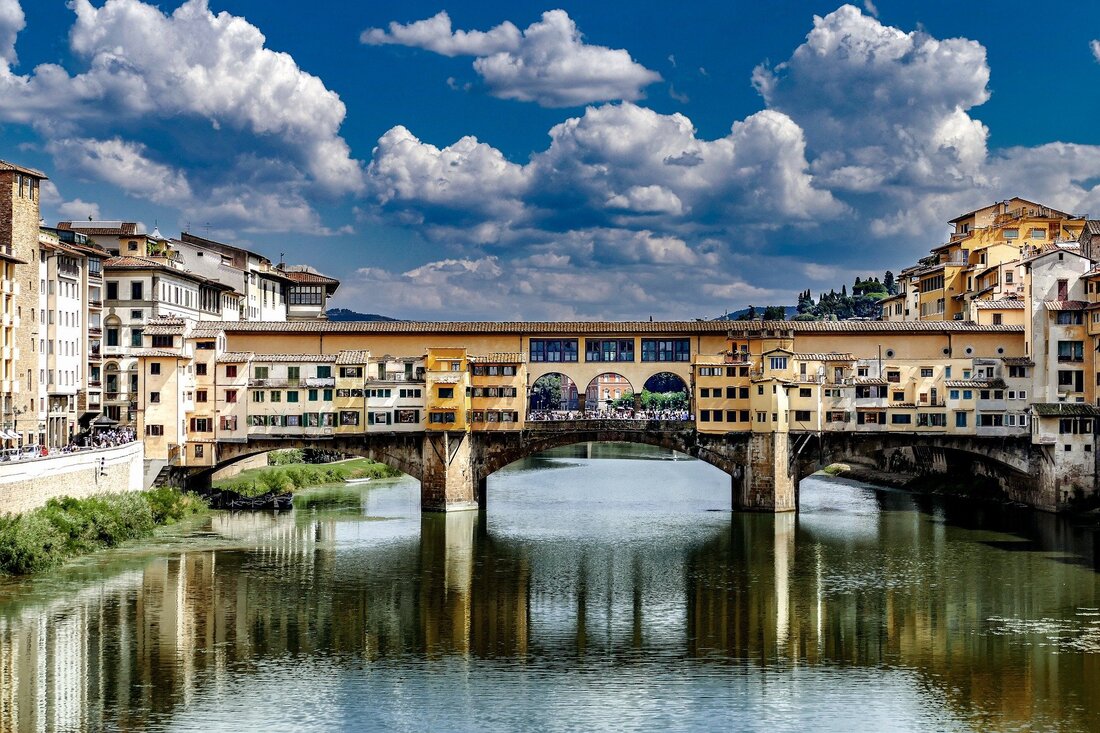 Florence
Firenze, the cradle of the Renaissance, is one of Europe’s great art cities. With frescoes by Giotto and Ghirlandaio, canvases by Botticelli and Bronzino, and sculptures by Michelangelo and Giambologna, there is so much exquisite art and architecture within its ancient walls that it’s easy to become overwhelmed. It is also the hometown that the Sommo Poet Dante Alighieri loved and hated. 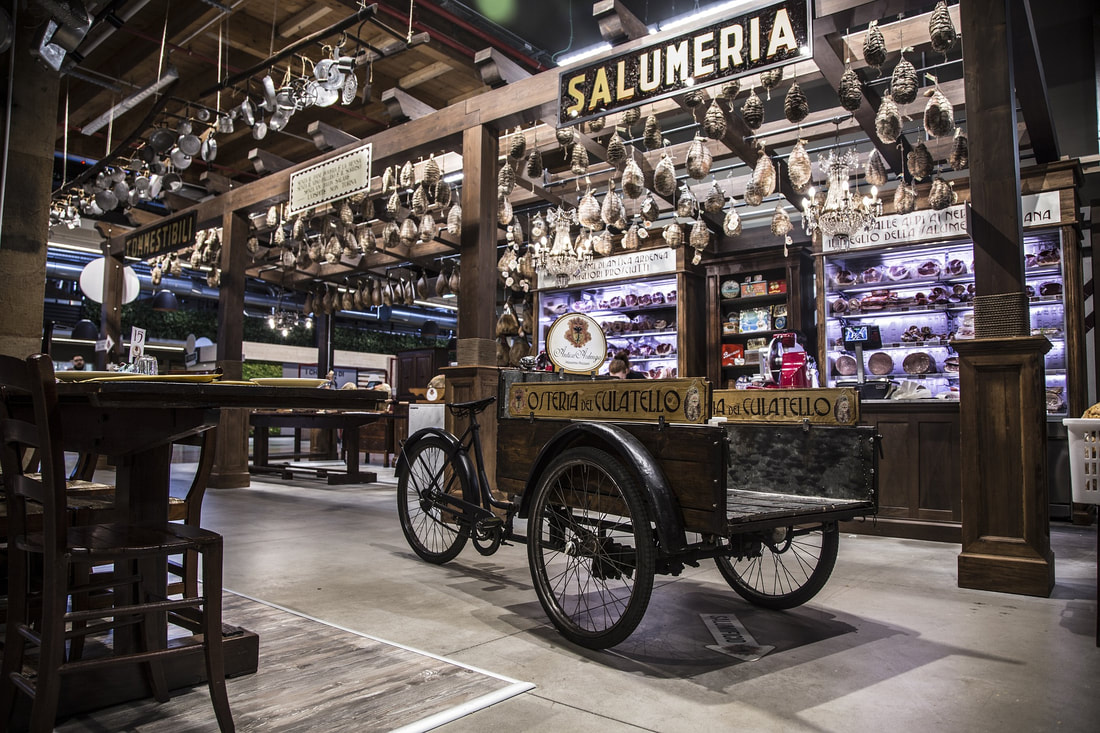 Bologna
A marvellous medieval centre, piles of perfect pasta and a thriving university, which is Europe's oldest, dating from 1088. Bologna ticks all the boxes for a memorable stay combining good food with cultural curiosities. There are treasures to be discovered include a peppering of medieval towers, miles of porticoes and monumental statues with intriguing stories attached.
But it is without a doubt the city's role as gastronomical capital that has really brought it to the fore in recent years. Food is taken seriously here: more than 30 official recipes – including much-loved dishes such as tortellini, lasagne and tagliatelle – are even registered at the Chamber of Commerce.
Get in touch
Contact us
or follow us on Facebook, Linkedin, Instagram or Youtube
E-mail: info@dantesocietylondon.com
Phone: 0044-7-742207947
22, Bryanston Mews West London W1H 2DD​
Terms and Conditions
Privacy Policy
Covid-19 Safety Measures
​Registration: Company Number 12548767